Context: A greenhouse operator in southern Ontario had invested heavily in automation and wanted to use data from their operation to optimize crop yields. The company was logging light levels, temperature, and irrigation volumes, but found that the relationship between these parameters and yields was confounded by data that was not being captured. For example, a crop might grow under ideal environmental conditions but produce poor yields because of a plant health issue that wasn't captured by the automated systems.

Insights: After interviewing a range of staff and building personas, I found that one set of users (cultivation technicians) was primarily responsible for data collection. The design team chose to focus on this group and developed a prototype mobile data collection app so that observations being recorded on paper could be digitized and analyzed. Task analysis of the cultivation technician use case informed the interface design, which was refined through user testing and focus groups.

Impact: The prototype app was adopted and put into regular use by cultivation technicians. During the first year of use, over 500 plant health observations were recorded. The app was critical to improvements in plant health that lead to a 50% reduction in product loss, generating over $400,000 in savings per year. Full implementation of data collection software was approved based on the success of the prototype.

Semi-structured interviews were conducted online with employees. There were two criteria for participation: first, the staff member had to interact with cultivation data; second, the interview sample was stratified to include staff of different levels of seniority. Structured high-level questions were combined with open-ended follow-up questions.

Six participants were drawn from different roles and from different levels of seniority (2 cultivation technicians, 2 plant scientists, and 2 managers). Interview questions explored what type of data staff interacted with, what their biggest challenges were with data collection, and what capabilities they wanted to see added to the data collection systems. 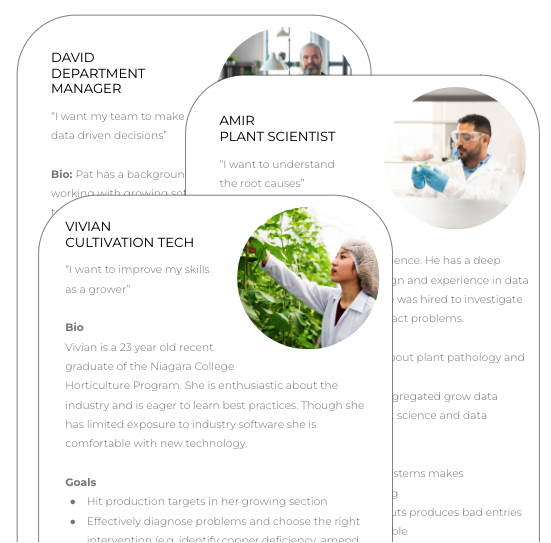 Thematic analysis of the interviews made it clear that use cases were similar within roles but differed significantly across roles.

I built a persona for each role, describing typical demographics, skill levels, goals, and challenges.

After presenting the personas to project stakeholders, the team decided to focus on cultivation technicians because they were responsible for the majority of data collection - the most critical area for improvement. 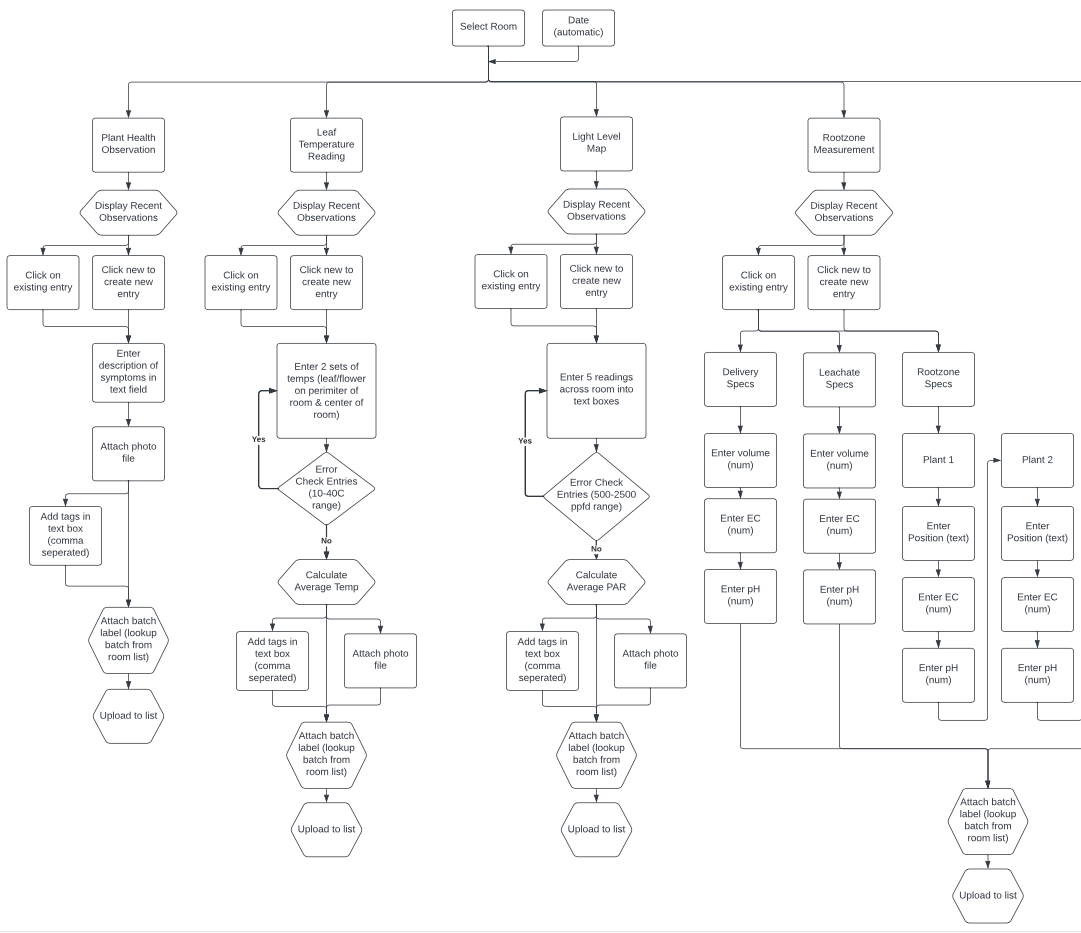 I analyzed cultivation technicians' data entry tasks to create a workflow that informed the design of the mobile app.

For example, the analysis identified two data entry use cases: taking multiple measurements in a single growing room and taking the same measurement across many growing rooms. The design team added menus and data tagging features to support both use cases. 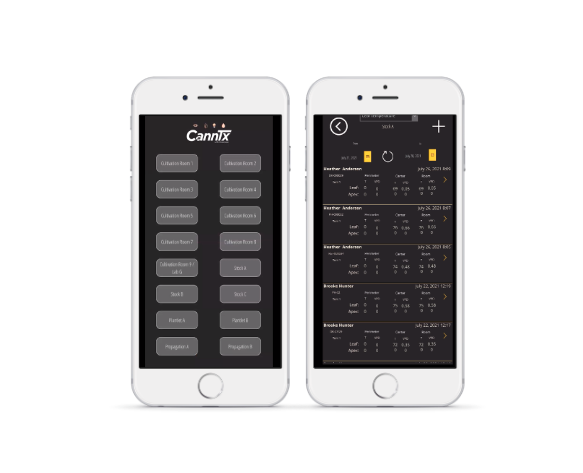 The team used a Sharepoint database for the app's backend because the company already used 365 for data storage, and every employee had an account. This simplified prototyping, so I was able to use a functional prototype during user testing.

The prototype mobile data collection app provided an interface for cultivation technicians to enter plant health observations and manual measurements into a digital database that could be analyzed alongside automatically logged data.

Remote moderated user tests were conducted with six cultivation technicians. Participants worked through a series of tasks using the mobile data collection app while thinking aloud. Notes from observers during the user testing sessions were summarized and presented to the design team.

Based on feedback from the user testing sessions, several menus were modified to improve clarity, input fields for spatial data (e.g. leaf temperatures from each corner of a growing area) were repositioned to be analogous to their real-world locations, and automated calculations were added to simplify entry of derived data. 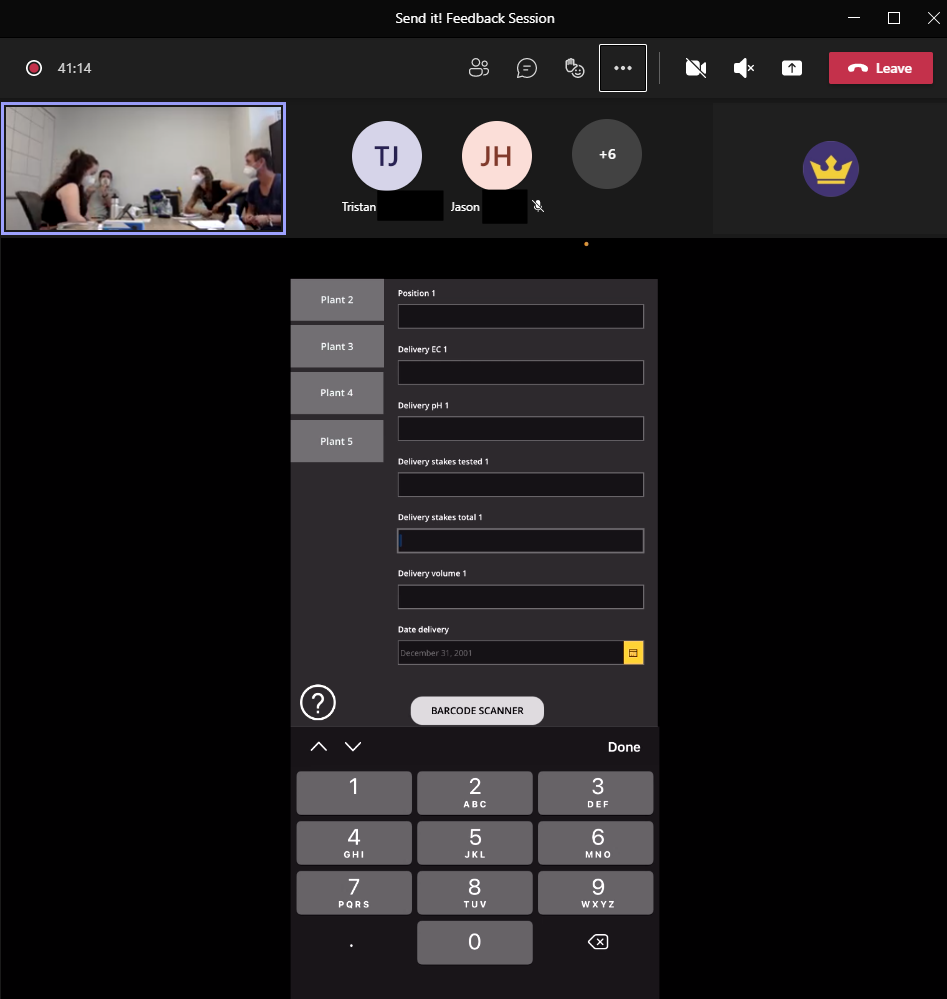 After revisions based on the user testing sessions, the prototype app was deployed with the entire cultivation team. Focus groups for user feedback were held 1 and 2 weeks after the users began working with the app.

I received strong feedback that the app added valuable functionality, saving paperwork and organizing observations. Users also reported difficulty reading the display under bright light in the greenhouse. This was an issue that did not appear in user tests because they were conducted in an office setting. The design was updated with high-contrast colors to address the issue.

The cultivation technicians found the prototype app so useful that they put it into full-time use while management built the case for a full plant monitoring software solution. Technicians review observations entered into the app in their weekly meetings and have taken hundreds of observations. The ROI from improvements to plant health facilitated by these observations has easily justified a full software implementation.

Overall, the process of taking the data collection app from concept to functional prototype was very rewarding. The business impact of the prototype exceeded my expectations. Some reflections from the process include: